Attorneys Tim O’Brien and Tyler Smith recently won summary judgment on behalf of an employer who was sued for whistleblower retaliation, defamation, and back pay. The employee argued that the employer had retaliated against him for complaining about perceived breaches of his employment contract, made defamatory statements about him, and owed back wages as a result of misclassifying him as an salaried employee rather than an hourly employee.

Tim and Tyler argued that none of the claims had merit. First, the whistleblower claim is barred because complaints about one’s own employment contract is not a “violation of law” as that term is used in the Whistleblower Protection Act. Second, the defamation claim is barred because the employee failed to comply with the notice requirements of the Maine Tort Claims Act. And third, the plaintiff cannot establish that the wages he did receive are deficient under Maine’s wage and hour law, regardless of whether he was properly classified as a salaried employee.

In a 20-page decision, the Superior Court agreed with the arguments Tim and Tyler raised in their motion for summary judgment. As such, the Court granted summary judgment in favor of the client. 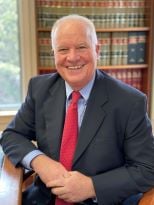 Timothy J. O’Brien has over 30 years of litigation experience. As a former prosecutor and in the course of his work in civil litigation, he has tried numerous cases before judges and juries. His practice focuses on employment and collegiate sports law issues. Mr. O’Brien advises colleges, universities, athletic department administrators, SWA’s, coaches, student-athletes, attorneys, and… Read more »

Tyler has a diverse litigation practice including criminal defense, appellate advocacy, civil litigation, and employment law in state and federal courts. Tyler has over a decade of experience in criminal defense. He is a graduate of NHTSA’s DWI Detection and Field Sobriety Testing training course. This is the exact training that law enforcement officers receive,… Read more »